What Are Some Things To Do For Seniors With Memory Problems? 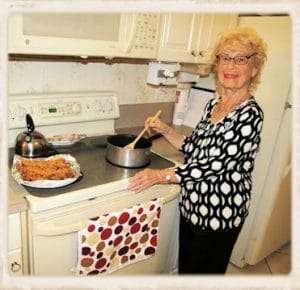 Memory problems are difficult to deal with, no matter what age you are – not only for the person having them but for those around them as well.  It affects all aspects of life and raises many concerns for safety.  But there are some ways that they can be alleviated with the help of family, friends and/or caregivers.

What are some things to do for seniors with memory problems?

My sweet mother-in-law just turned 98 years old.  She is independent, lives alone and is extremely active.  Last week, for her birthday I told her I was sending her 12 books to read, one for each month of her 98th year.  We spoke about the kinds of books I ordered and how I hoped she liked them all.  She was so kind and appreciative.  We spoke on this topic for about 15 minutes.

Yesterday, she called me to ask me why is she receiving so many books from me?  She had no memory of our conversation.

No matter how healthy she is, it’s very difficult to escape problems with memory issues as she ages.  Of course, severe memory issues are not inevitable, just like any muscle in your body – the more you use it the less likely you’ll lose it.

But, there’s no “cure” as of yet for general memory loss.  The best treatments available today work to slow it down.

If your senior loved one is demonstrating the kind of memory problems that are affecting his/her daily life or presenting a safety hazard, I urge you to seek the services of an Occupational Therapist or the senior’s doctor to help with some memory therapy.

Should I Correct Someone With Memory Loss?

When I interned as an Occupational Therapist, I was living in South Florida.  As you can probably imagine, the majority of patients in hospitals and rehab centers were elderly – and many of them had mild to severe memory problems.

As you can probably imagine – this was not a good approach.  My poor patients became frightened, anxious and even more confused.  Thankfully, that only lasted my first year as an OT – then the approach evolved to what it is today.  Which is that if you are aware of memory problems in your elderly loved one – and they make a statement that isn’t true or they forget an event (like the conversation I had with my mom-in-law) just go along with it, let it slide and don’t make an issue of it.

At the end of the day, it serves no purpose to continuously try to correct someone with any form of slight or severe dementia.

Instead – what we (medical professionals) ended up doing a few years later was to “go along” with the memory our patients presented.

So, for example: If your mother tells you that the doctor appointment is at 2pm on Thursday – your response could be something like “Oh, I thought it was at 4pm on Wednesday – let me check because I get things mixed up sometimes.”

Or – if she mentions that her husband is coming home for dinner (but he is deceased) simply begin talking about some memories of him.  He is on her mind and in my experience, it should help her to speak about him.  Gently move the conversation to other family members, events, topics, etc.

I would recommend to ask your doctor to prescribe some therapeutic interventions with a social worker who can help you to improve your communication with someone with memory issues.

Keep To A Schedule

It’s very important to keep to a schedule and better if you can keep to the schedule that the senior person has been adhering to.

I remember years ago, we had a patient (let’s call him Sam) come into our unit with mild dementia.  Although he was able to dress himself and feed himself he desperately needed to keep to his schedule.  He would get up every day at the same time, read his newspaper at the same time and watch his favorite TV shows at the same time.

But every day, around 4 pm he would walk out of the unit and sometimes, out of the facility.  After the first time, we put an alarm on his clothing to alert us if he got out again.  And he did.  So, we asked his daughter what did he do every day at 4 pm?

Her answer was “He went to the corner bar.”

So, our Recreation Therapist (who was amazing) built a “bar” of sorts in the Rec Room.  She served peanuts and juice and after about two weeks of redirecting Sam towards the Rec Room at 4 pm he began going there himself.  It was a perfect solution for him during that time.

Use Post Notes and Signs Everywhere In The House

For some seniors with memory problems, posting signs and notes up are very helpful.  It’s important to know that if memory loss continues to get worse, they may be able to READ what they see but they will lose the ability to COMPREHEND what they are reading.   This is very important especially when it comes to taking medication.

In the rehab hospital I worked in, many doctors would often tell me the patient was good to go home and live independently because the doctor asked them to read their prescription instructions and they were able to do so.  But I would often counterpoint by demonstrating that the patient was not able to understand what they just read.

The idea is to help the senior with memory problems to read what to do and where things are.

Alexa and Google Home To Remind Them Of Tasks

Many have seen this very funny SNL skit on seniors attempting to use Alexa.  Although they are exaggerating the issues (for comedy) the truth is that learning to use technology is not an easy task for the elderly.  Who knows what WE will be having problems with as we get older!

But, for safety matters, technology can really be a very useful tool.

You can use Alexa and Google Home to give you verbal reminders on a daily basis.  This works well for medications, appointments and other daily tasks.   Set up Reminders on these types of tools and both you and your senior loved ones will be told when to do what!

How To Set Up Reminders in Alexa

How To Set Up Reminders in Google Home

The following fruits contain plenty of antioxidants, which can lessen the brain’s inflammation and stress, which in turn may prevent seniors from getting Alzheimer’s. These fruits are:

Don’t stop with just the above fruits! The following edible eats contain antioxidants and omega-3 fatty acids that could heal damaged brain cells and even create new ones.

Here are the foods to incorporate into a senior diet:

Read our article, How To Keep An Elderly Mind Sharp, for a list of which foods are bad for the brain.

How To Prevent Memory Loss In Old Age

People worry that memory loss is a sign of Alzheimer’s disease, but the National Institute On Aging says that it isn’t necessarily a sign of impending dementia. They report that, “Other causes for memory problems can include aging, medical conditions, emotional problems, mild cognitive impairment, or another type of dementia.”

If you are wondering how to prevent memory loss in old age, try the following:

When To Get Help For Memory Loss

A professional assessment and diagnosis by your physician is deemed necessary when the memory issues impede daily activity and/or become a safety hazard.  Some examples would be…

If you notice any of these signs, please make an appointment immediately with a doctor and ask for a cognitive / memory assessment.  Speak with your elderly loved one about what you are seeing and hopefully they will not argue with you and will concede to a doctor’s visit.

Other Tools To Help With Memory Loss

Other tools that you can use could include:

I hope this information was useful for you and will help you to take care of your senior parent or other loved one.

How To Keep An Elderly Mind Sharp

What Is A Good Way For Seniors To Remember Passwords?

How Does Reminiscence Help With Dementia?

How Do You Keep An Alzheimer’s Patient Safe At Home?

About the Author: Esther Kane

Esther Kane is a certified Senior Home Safety Specialist through Age Safe America. She also graduated from Florida International University with a BS in Occupational Therapy. She practiced OT in Florida, Georgia and North Carolina for 10 years. She specialized in rehabilitation for the adult population. Her expertise in home assessments and home safety issues for seniors will help you to make the best possible decisions for your elderly parent or senior that you are caring for.

Robin and Esther are the duo behind SeniorSafetyAdvice.com!  We both have years of experience in senior care – Esther as an Occupational Therapist and Robin as a Dental Hygienist and we have both cared for our elderly parents.  In addition, we are both Certified Senior Home Safety Specialist’s through Age Safe America.

We’ll email you weekly with our newest articles & videos

We HATE spam as much as you do! No worries there!