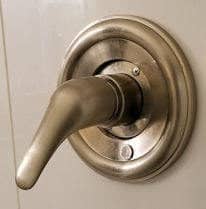 You may not realize the importance of things like faucet levers until you have to deal with issues such as arthritis.  For seniors, changing sink and shower lever faucet handles to ones that are easier to use can help to make the difference between a difficult task and a pleasant one.

This is true especially for seniors living in older homes.  The round faucet knobs that were so popular years ago are difficult to turn with arthritic hands, especially for anyone suffering from rheumatoid arthritis.

So, the general recommendation is to use single lever handles on all sinks and showers but in this article, we’re going to explore what I would suggest for the bathtub and shower.

There are many types of faucets to choose from these days but to make a shower as senior friendly as possible, let me introduce you to what I have found to be most useful.

As I mentioned in my article on senior friendly showers – my mother had arthritic hands in her later years and her shower had a round knob faucet handle.  This became more and more difficult for her to turn and use properly.

So, we replaced it with a single handle faucet which worked perfectly for her.  Some of them even come with a little curve on the handle giving it a smoother surface to press upon.  They look like this Delta Faucet Foundations model that I found on Amazon.

Another feature that we changed for my mother was the faucet for her bathtub.  The house that she bought came with a spout diverter so that when the water was turned on and began to fill the bathtub, if she had wanted to divert it to the shower she would have to pull down the spout on the faucet.

This proved to be difficult for her as her arthritis in her hands got worse over time.  We simply replaced that spout with a standard one that was controlled with a single lever that she could pull up.

I would recommend one that had a lever that had some kind of ridge on it like this one from American Standard.  Reason is that the ridge gives the user a better grip than a smooth surface.

And, just in case you’re not sure what a spout diverter is, I made a short video for you.

If you are currently caring for an elderly person then you are very much aware of how difficult every move can be.  Sometimes the amount of energy spent on performing a simple task is tremendous and very exhausting.  So, anything that can be done with less moves, the better it will be for your senior loved one.

A Little Tip For The Water Temperature

I didn’t have to do this for my mother but I do remember doing this for a few of my patients.

To make it easier for them to move the shower lever to where they would get the exact temperature that they wanted, I would mark the spot with a very bright (usually green or red) nail polish.  That way my elderly patient would just move the lever once to that spot and they would be good to go.

Of course, if you are installing a removable shower head with a built in on/off switch, then it may not matter what kind of faucet lever you have.  Turning the water on and off could be handled via the shower head itself.

If this is your plan, then I would recommend getting a shower head that has a grip on it (easier for your senior loved one to handle) like this one from Yoo.Mee (I know – it’s a funny name).  It’s an inexpensive solution that may work for your elderly person.

Robin and Esther are the duo behind SeniorSafetyAdvice.com!  We both have years of experience in senior care – Esther as an Occupational Therapist and Robin as a Dental Hygienist and we have both cared for our elderly parents.  In addition, we are both Certified Senior Home Safety Specialist’s through Age Safe America.

We’ll email you weekly with our newest articles & videos

We HATE spam as much as you do! No worries there!